As a temporary recluse. . . isolation can help you to gain perspective. Many a serious thinker has been produced in prisons, where we have nothing to do but think. . . . The danger is, however, that this kind of isolation will sire all kinds of strange and perverted ideas. You may gain perspective on the larger picture, but you lose a sense of your own smallness and limitations. . . Be careful to keep your way back into society open. — The 48 Laws of Power (18. Do not build fortresses to protect yourself: isolation is dangerous).

As ever, Greene is right: isolation can be either an indispensable tonic or lethal toxin; it all depends on the dosage. What escapes him is that in the information age, the value of regular and extended bouts of solitude has exponentially increased while the associated risks have nearly vanished. It is easier than ever to reconnect to the world after a long pause and more advantageous than ever to occasionally escape it.

Observance of the Law

In 1975, Bill Gates and Paul Allen read about the MITS Altair 8800 in the January issue of Popular Electronics. The Altair was soon to become the first commercially successful personal computer, and Gates and Allen, like many other geeks of their period, could see they were crossing the threshold of a new age. Soon hardware would become so affordable that software would enter the realm of consumer business. 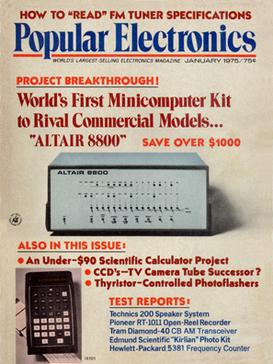 The two called up Ed Roberts, founder of MITS, to announce they had an interpretor for BASIC that ran on the Altair. Would he be willing to license it? Not only innovators in software but also in sales strategy, Gates and Allen were prototyping what would become known as "vaporware"—a fancy synonym for "lying". They had no interpretor nor even an Altair to test code on. Skeptical but indulging, Roberts arranged for future Microsoft to demo its code several weeks later at the MITS headquarters in Albuquerque. [1]

What followed was a binge of—well—Gatesian proportion. First, they needed to procure an Altair. They settled for emulating one on the PDP-10 in Harvard's Aiken lab. While Allen was busy writing an emulator (with only the Altair's instruction manual as reference), Gates was already storming away at the BASIC interpretor code, content to write on yellow legal pads until the emulator was ready.

Gates gave up studying for exams and even his obsession with poker. For eight weeks, Gates and Allen, along with Monte Davidoff (who they had hired to write the math module), spent day and night perfecting the code.

“He’d be in the middle of a line of code when he’d gradually tilt forward until his nose touched the keyboard,” Allen said. “After dozing an hour or two, he’d open his eyes, squint at the screen, blink twice, and resume precisely where he’d left off—a prodigious feat of concentration.” [2]

The miracle above all other miracles is that, at the end of this marathon, when Allen flew down to demo the interpretor in person, it worked. Their code had never seen the Altair in person, yet it did what it was supposed to. It is rumored that the demo gods have never again been so indulging.

Today's software developers tend to stick to one of the many agile methodologies: Scrum, Kanban, Extreme Programming (XP), etc. The overarching idea is that development should be iterative, incremental, and evolutionary. Shorter build sprints that clash more regularly with actual users exerts pressure on products to solve real-world needs rather than the whims of—let's admit it—not particularly representative software developers.

Agile development is anti-isolationism manifested as a software philosophy, and its popularity is worth celebrating: software today is, on the whole, vastly more user-friendly than it used to be. Even so, we should not altogether discount the value of the occasional creative binge in technology. Some types of products need to be more complete before they can be put out into the real world: a BASIC interpretor is one such example, others include product with sensitive usecases, such as in security and healthcare. Like a good wine, these products require a period of isolation to reach maturity. There is never just one answer to building great products.

In technology occasionally, in science often, and in the arts usually, isolation is a wonderful stimulant of creativity.

Bill Gates still organizes a semiannual reading and thinking week. He retreats to an isolated cabin cut off from internet and restricts his input to only written material and outsourced meals. Clarity of thought requires time and distance.

"The mind is sharper and keener in seclusion and uninterrupted solitude. No big laboratory is needed in which to think. Originality thrives in seclusion free of outside influences beating upon us to cripple the creative mind. Be alone, that is the secret of invention; be alone, that is when ideas are born. That is why many of the earthly miracles have had their genesis in humble surroundings." — Nikola Tesla

Tesla may have died a pauper, but, in posthumous compensation, few other technologists are remembered for such breadth of influence. That the electric vehicle company is named "Tesla" rather than "Edison" goes to show who really won that competition.

In physics, the year 1905 will forever be remembered as Einstein's annus mirabilis. He published four ground-breaking papers (each of which might have independently warranted a Nobel Prize): on the photoelectric effect (for which he actually got the prize), on Brownian motion (which paved the path to experimentally verifying the atomic theory of matter), on special relativity, and on his famous e=mc2 formula. All while Einstein was spending his working week at a patent office—in his words, the "worldly cloister" that "hatched [his] most beautiful ideas" [3].

Gregor Mendel conducted his pioneering work on genetics as a monk at an actual cloister: the Augustinian monastery of St. Thomas in what is now Brno, Czechia [4]. That said, it was not quite the secluded outpost you might imagine it to be; the monastery had been a center of learning in the area for centuries [5]. Nor was Mendel entirely without scientific connections. He published his work abroad and lectured before dozens of scientists, including the leading biologist Carl Nägeli. Still, one doubts1 whether Mendel could have had as much success in a more urbane setting. His breakthrough results demanded years of patience, and few other employments would have afforded him this luxury in such abundance. Mendel's major weakness seems to have been the externally imposed kind of isolation rather than the self-imposed kind. The scientific community ignored his results until decades later, well after his death. Who knows where we might be today if only Darwin and Mendel has cross-pollinated their ideas.

Moreover, we ought to retire into ourselves very often; for intercourse with those of dissimilar natures disturbs our settled calm, and rouses the passions anew, and aggravates any weakness in the mind that has not been thoroughly healed. Nevertheless the two things must be combined and resorted to alternately—solitude and the crowd. The one will make us long for men, the other for ourselves, and the one will relieve the other; solitude will cure our aversion to the throng, the throng our weariness of solitude." — De Tranquillitate Animi (Seneca)

The world of art, in particular, is filled with the stories of successful semi-isolationists. Impressionists like Monet, Pissarro, Sisley, Morisot, and later post-impressionists like Gaugin, van Gogh, Cézanne, Seurat—all routinely retreated to the countryside where they could capture landscapes unencumbered by academic expectations. They eventually had to return to major cities to display their own works and share inspiration 2, and it was by alternating city and country that art finally escaped the shackles of photorealism. Progress often means forgetting the old, and people do not readily forget when together.

"I propose that if you want a simple step to a higher form of life, as distant from the animal as you can get, then you may have to denarrate, that is, shut down the television set, minimize time spent reading newspapers, ignore the blogs. Train your reasoning abilities to control your decisions; nudge System 1 (the heuristic or experiential system) out of the important ones. Train yourself to spot the difference between the sensational and the empirical. This insulation from the toxicity of the world will have an additional benefit: it will improve your well-being."— The Black Swan (Nicholas Nassim Taleb)

As in the visual arts, so in music. Eric Satie, who might today be diagnosed a hoarder (among many other clinical labels), spent decades mostly holed up in a tiny falt in Arcueil, dressed in an invariable costume of grey velvet. He was in contact with other artists (see, for example, the ballet Parade jointly produced by Satie, Cocteau, and Picasso), but, all-in-all, he consummates the ideal of recluse. João Gilberto, Brian Wilson of the Beach Boys, Syd Barrett of Pink Floyd, none of these were quite as eccentric as Satie, but all demonstrate that moderate reclusiveness need not impede musical brilliance.

We come finally to the written word. The most famous literary recluse is likely J. D. Salinger, who lived most of his life at an unknown address in Cornish (the middle of nowhere, more or less). He granted one interview in 1953, felt betrayed by the interviewer, then built a fence around his property and rarely spoke to the press ever again [6]. His example is not particularly vindicating of isolationism since his output dwindled to nothing during his self-imposed exile. Still, there are plenty of literary recluses who managed to publish throughout the years of solitude: Emily Brontë, Emily Dickinson, Thomas Pynchon, even Harper Lee ultimately wrote a sequel.

Isolation might not win you Greene's political variety of power. But it can be a worthy tool in pursuing the more productive varieities of power—technological, scientific, artistic. Our interconnected world makes it easier than ever to return to the world at large after a protracted absence. In principle, anyone has a chance on the activity feeds of Twitter, Reddit, Instagram, TikTok, HackerNews, etc. True, some of these platforms are less than conducive to long-form, thought-intensive content, but, at least, spending a decade as a hermit no longer means you have to spend the rest of your life meditating in the same cave.

Meanwhile, most of us have lost our attention spans to the surveillance algorithms. We're locked in cycles of endless consumption, thus unable to produce by ourselves. When you feel that pressure, take a page from the history books, and consider stepping away from the multitude.

As a very practical takeaway, start group brainstorms with a silent individual brainstorm—without already committing yourselves to any particular solution. When we argue our cases from the start, the net result tends to be a dilution rather than concentration of the best ideas.3 Otherwise, the initial anchor prevents you from covering new ground—you constantly cycle through the same ideas, unable to step outside.

In sum, whatever the concentration—a five minute pre-meeting meditation or five year prison sentence—isolation is invaluable if you just take the opportunity.

"Ordinary men hate solitude. But the Master makes use of it, embracing his aloneness, realizing he is one with the whole universe." — Tao te ching (42)