We need a taxonomy for principles

When you start collecting principles, a natural question arises: how to organize these principles? Clear organization is not just useful for quicker access but — when the collecting is crowd-sourced — critical to ensuring that the database of principles grows healthily and sustainably. We need a balance between the extremes of hairballs and orphan principles.

Now, there are books written on this subject, knowledge management (I promise, it's not nearly as dull (or settled) a subject as you might think). That said, one thing at a time. In this post, all I want to do is propose a few dimensions I think might be useful for classifying principles in the future.

There's a bridging principle between the two in that accomplishing any normative goals requires you to have an accurate descriptive view of how the world is. Still, in general, we can make a pretty clean break between these categories.

Universal and Situational ("First" and "Derived")

The universe looks different at different length scales: the discrete, quantum atoms in Angströms give rise to continuous, classical fluids at meter scales and might yet contain continuous strings at Planck-lengths.

Physics gives us a formal way to linking the descriptive principles of one length scale to those of another—the "the Renormalization Group". This is a (meta-)principled approach to constructing "coarse-grained", higher order principles out of base principles. In this way, the postulates of quantum gravity would give rise to those of classical mechanics, but also those of chemistry, in turn biology, psychology, etc.

The same is true on the normative end. "Do no harm" can look very different in different situations, and the Golden Rule has more subtleties and gradations than I can count.

In general, the "first principles" in these chains of deduction tend to be more universal (and apply across a wider range of phenomena). Evolution doesn't just apply to biological systems but to any replicators, be it cultures, cancers, or memes. 1

One of the main failure modes of a "principles-driven approach" is becoming overly rigid—seeing principles as ironclad laws that never change or break.

I believe one of the main reasons for this is error that we tend to think of principles as deterministic "rules". We tend to omit qualifiers like "usually", "sometimes", "occasionally" from our principles because they sound weaker. But randomness has a perfectly important role in description (the quantum randomness of measurement or the effective randomness of chaotic systems) and in prescription (e.g., divination rituals may have evolved as a randomizing device to improve decision-making).

So we shouldn't shy away from statements like "play tit-for-tat with 5% leakiness". But also less precise statements like "avoid refined sugars, but, hey, it's okay if you have a cheat day every once in a while because hey you also deserve to take it easy on yourself."

Using these classifications, we can make more thorough sense of the initial set of Open Principles divisions: 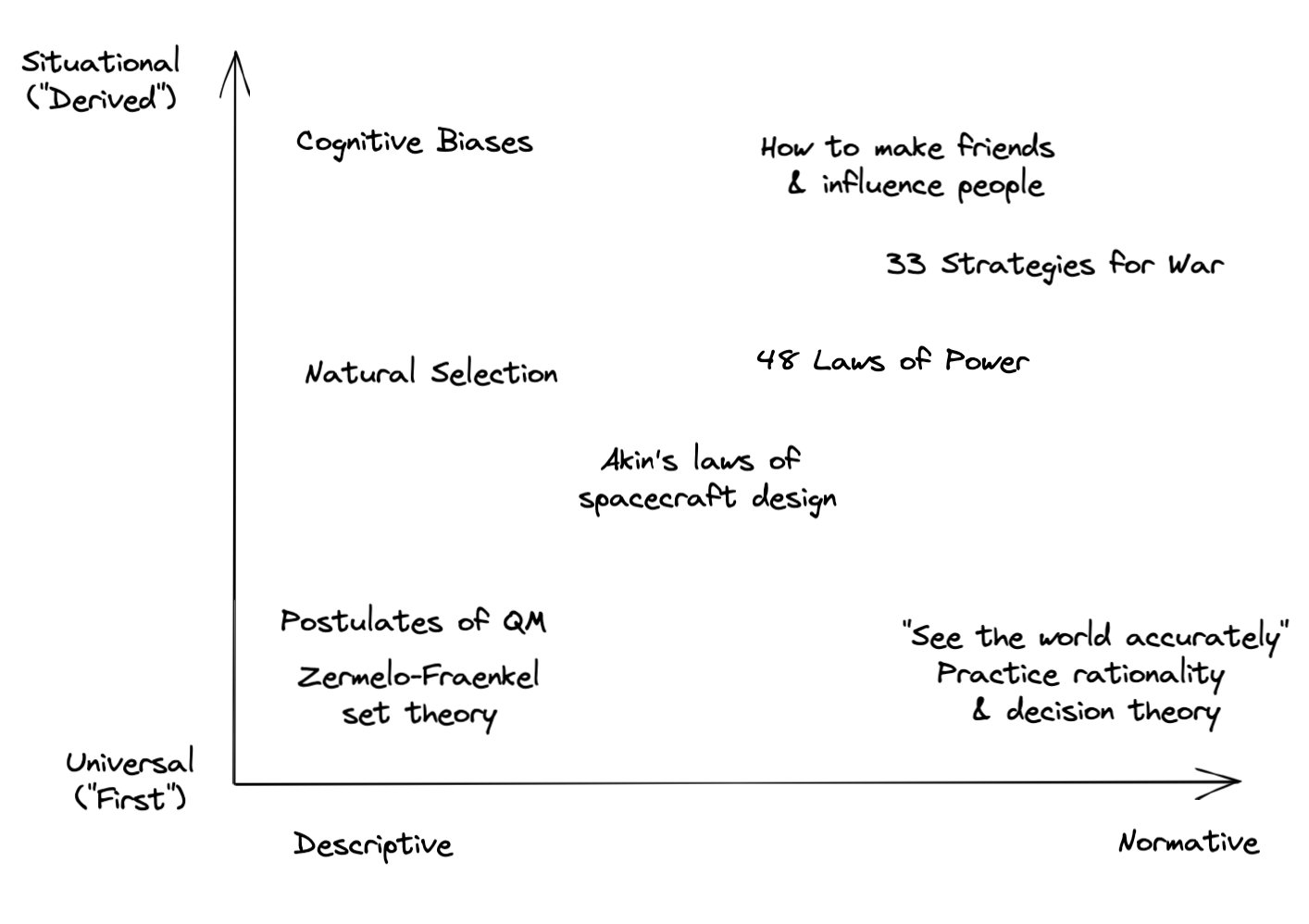 A few things that might help us keep the Open Principles healthy: