How much do the models we train depend on the paths they follow through weight space?

Should we expect to always get the same models for a given choice of hyperparameters and dataset? Or do the outcomes depend highly on quirks of the training process, such as the weight initialization and batch schedule?

Vivek Hebbar and Evan Hubinger have already explored the implications of path-dependence for alignment here. In this post, I'd like to take a step back and survey the machine learning literature on path dependence in current models. In future posts, I'll present a formalization of Hebbar and Hubinger's definition of "path dependence" that will let us start running experiments.

At a glance, neural networks appear to be rather path-dependent. Train the same network twice from a different initial state or with a different choice of hyperparameters, and the final weights will end up looking very different.

But weight space doesn't tell us everything. Neural networks are full of internal symmetries that allow a given function to be implemented by different choices of weights.

For example, you can permute two columns in one layer, and as long as you permute the corresponding rows in the next layer, the overall computation is unaffected. Likewise, with ReLU networks, you can scale up the inputs to a layer as long as you scale the outputs accordingly, i.e.,

for any α>01. There are also a handful of "non-generic" symmetries, which the model is free to build or break during training. These correspond to, for example, flipping the orientations of the activation boundaries2 or interpolating between two degenerate neurons that have the same ingoing weights.

Formally, if we treat a neural network as a mapping f:X×W→Y, parametrized by weights W, these internal symmetries mean that the mapping W∋w↦fw​∈F is non-injective, where fw​(x):=f(x,w).3

What we really care about is measuring similarity in F. Unfortunately, this is an infinite-dimensional space, so we can't fully resolve where we are on any finite set of samples. So we have a trade-off: we can either perform our measurements in W, where we have full knowledge, but where fully correcting for symmetries is intractable, or we can perform our measurements in F, where we lack full knowledge, but

Figure 1. A depiction of some of the symmetries of NNs.

Ainsworth, Hayase, and Srinivasa [2] find that, after correcting for permutation symmetries, different weights are connected by a close-to-zero loss barrier linear mode connection. In other words, you can linearly interpolate between the permutation-corrected weights, and every point in the linearly interpolation has essentially the same loss. They conjecture that there is only global basin after correcting for these symmetries.

In general, correcting for these symmetries is NP-hard, so the argument of these authors depends on several approximate schemes to correct for the permutations [2].

Some of the most compelling evidence for the low path-dependence world comes from the circuits-style research of Olah and collaborators. Across a range of computer vision models (AlexNet, InceptionV1, VGG19, ResnetV2-50), the circuits thread [3] finds features common to all of them such as curve and high-low frequency detectors [4], branch specialization [5], and weight banding [6]. More recently, the transformer circuits thread [7] has found universal features in language models, such as induction heads and bumps [8]. This is path independence at the highest level: regardless of architecture, hyperparameters, and initial weights different models learn the same things. In fact, low path-dependence ("universality") is often taken as a starting point for research on transparency and interpretability [4]. 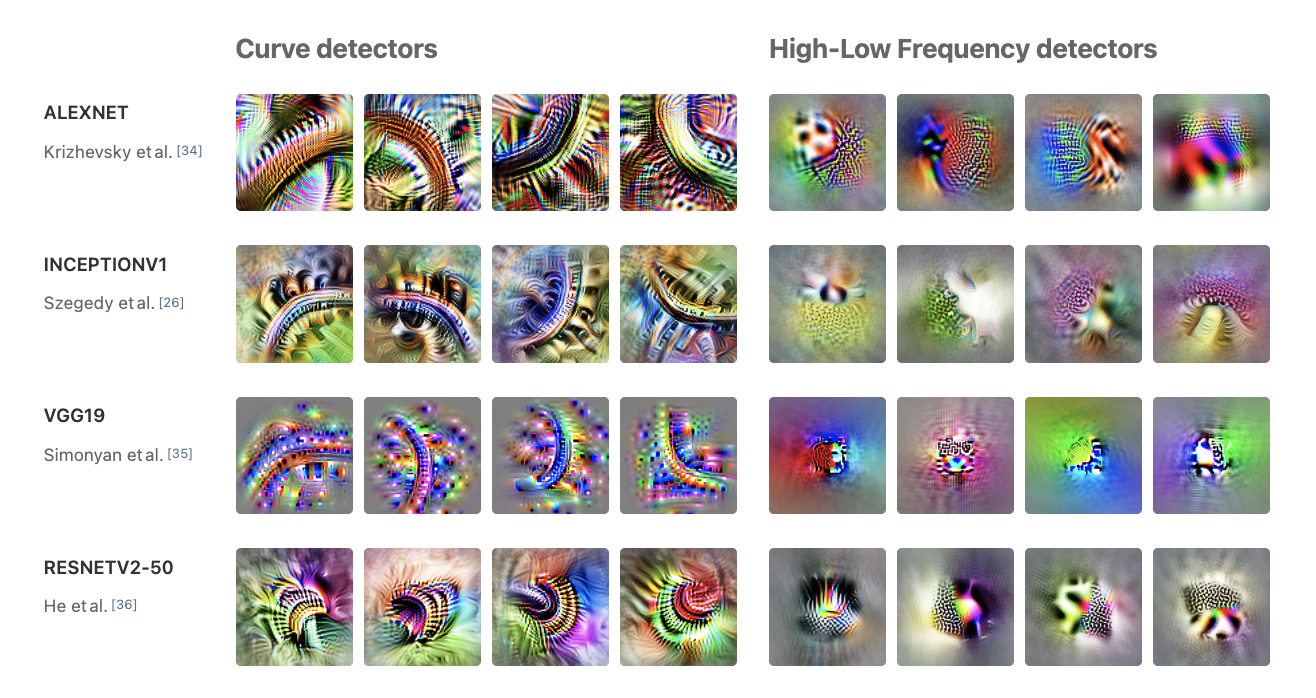 BERTS of a feather do not generalize together