A lot has changed for me in the past month. My partner and I decided to close the business we had started together, and I've thrown myself full-force at AI safety.

We weren't seeing the traction we needed, I was nearing the edge of burnout (web development is not the thing for me1), and, at the end of the day, I did not care enough about our users. It's hard to stay motivated to help a few patients today when you think there's a considerable risk that the world might end tomorrow. And I think the world might end soon — not tomorrow, but more likely than not in the next few decades.2 At some point, I reached a point where I could no longer look away, and I had to do something.

So I reached out to the 80,000 hours team, who connected me to people studying AI safety in my area, and helped me apply to the ███████ ████ ██████████ for a six-month upskilling grant to receive $25,000 for kickstarting my transition to AI.

Now, I'm not a novice (my Bachelors and Masters theses applied techniques from statistical physics to understand neural networks), but I could definitely use the time to refresh & catch up on the latest techniques. A year is a long time in AI.

Next to "upskilling" in ML proper, I need the time to dive deep into AI safety: there's overlap with the conventional ML literature, but there's also a lot of unfamiliar material.

Finally, I need time to brush up my CV and prepare to apply to AI labs and research groups. My current guess is that I'll be best-suited to empirical/interpretability research, which I think is likely to be compute-constrained. Thus, working at a larger lab is crucial. That's not to mention the benefits of working alongside people smarter than you are. Unfortunately (for me), the field is competitive, and a "gap year" in an unrelated field after your masters is likely to be perceived as a weakness. There's a signaling game at hand, and it's play or be played. To sum, spending time on intangibles like "networking" and tangibles like "publications"3 will be a must.

Like all good plans, this plan consists of three parts:

There's also an overarching theme of "community-building" (i.e., attending EAGs and other events in the space) and of "publishing".

There are a bunch more, but these are the only ones I'm currently committing to finishing. The rest can serve as supplementary material after.

I'm not particularly concerned about publishing to prestigious journals, but getting content out there will definitely help. Most immediately, I'm aiming to convert / upgrade my Masters thesis to an AI Safety/Interpretability audience. I'm intrigued by the possibility that perspectives like the Lyapunov spectrum can help us enforce constraints like "forgetfulness" (which may be a stronger condition than myopia), analyze the path-dependence of training, and detect sensitivity to adversarial attacks / improbable inputs, that random matrix theory might offer novel ways to analyze the dynamics of training, and, more generally, that statistical physics is an un(der)tapped source of interpretability insight.

In some of these cases, I think it's likely that I can come to original results within the next half year. I'm going to avoid overcommitting to any particular direction just yet, as I'm sure my questions will get sharper with my depth in the field.

Next to this, I'm reaching out to several researchers in the field and offering myself up as a research monkey. I trust that insiders will have better ideas than I can form as of yet, but not enough resources to execute (in particular, I'm talking about PhD students), and that if I make myself useful, karma will follow.

Of course, this is simplifying; research is a continuous process: I'll start to produce output before the next three months is up & I'll continue to absorb lots of input when the three months is up. Still, heuristics are useful.

I'll be checking in here on a monthly basis — reviewing my progress over the previous month & updating my goals for the next month. Let's get the show off the road.

Epistemic status: grain of salt. There's lots of uncertainty in how many FLOP/s the brain can perform.

The first problem is that these people are usually comparing the energy requirements of training large AI models to the power requirements of running the normal waking brain. These two things don't even have the same units.

Let's start with the easier comparison: a trained model vs. a trained brain. Joseph Carlsmith estimates that the brain delivers roughly 1 petaFLOP/s (=1015 floating-point operations per second)1. If you eat a normal diet, you're expending roughly 10−13 J/FLOP.

Meanwhile, the supercomputer Fugaku delivers 450 petaFLOP/s at 30 MW, which comes out to about 10−11.5 J/FLOP…. So I was wrong? Computers require almost 500 times more energy per FLOP than humans?

What this misses is an important practical point: supercomputers can tap pretty much directly into sunshine; human food calories are heavily-processed hand-me-downs. We outsource most of our digestion to mother nature and daddy industry.

Even the most whole-foods-grow-your-own-garden vegan is 2-3 orders of magnitude less efficient at capturing calories from sunlight than your average device2. That's before animal products, industrial processing, or any of the other Joules it takes to run a modern human.

After this correction, humans and computers are about head-to-head in energy/FLOP, and it's only getting worse for us humans. The fact that the brain runs on so little actual juice suggests there's plenty of room left for us to explore specialized architectures, but it isn't the damning case many think it is. (We're already seeing early neuromorphic chips out-perform neurons' efficiency by four orders of magnitude.)

Here's how we'll estimate this:

Fortunately, we can piggyback off the great work done by Ajeya Cotra on forecasting "Transformative" AI. She calculates that GPT-3 performs about 1012 FLOP/s3, or about as much as a bee.

Now, you may have some objections. You may consider bees to be significantly more impressive than GPT-3. You may want to select a reference animal that evolved earlier in time. You may want to compare unadjusted energy needs. You may even point out the fact that the Chinchilla results suggest GPT-3 was "significantly undertrained".

Object all you want, and you still won't be able to explain away the >15 OOM gap between evolution and gradient descent. This is no competition.

What about other metrics besides energy and power? Consider that computers are about 10 million times faster than human brains. Or that if the human brain can store a petabyte of data, S3 can do so for about $20,000 (2022). Even FLOP for FLOP, supercomputers already underprice humans.4 There's less and less for us to brag about it.

Brain are not magic. They're messy wetware, and hardware has caught up.

Postscript: brains actually might be magic. Carlsmith assigns less than 10% (but non-zero) probability that the brain computes more than 1021 FLOP/s. In this case, brains would currently still be vastly more efficient, and we'd have to update in favor of additional theoretical breakthroughs before AGI.

If we include the uncertainty in brain FLOP/s, the graph looks more like this:

Squiggle snippets used to generate above graphs. (Used in conjunction with obsidian-squiggle).

LessWrong has gotten big over the years: 31,260 posts, 299 sequences, and more than 120,000 users.1 It has budded offshoots like the alignment and EA forums and earned itself recognition as "cult". Wonderful!

There is a dark side to this success: as the canon grows, it becomes harder to absorb newcomers (like myself).2 I imagine this was the motivation for the recently launched "highlights from the sequences".

To make it easier on newcomers (veterans, you're also welcome to join in), I've created an Obsidian starter-kit for taking notes on the LessWrong core curriculum (the Sequences, Codex, HPMOR, best of, concepts, various jargon, and other odds and ends).

There's built-in support to export notes & definitions to Anki, goodies for tracking your progress through the notes, useful metadata/linking, and pretty visualizations of rationality space… 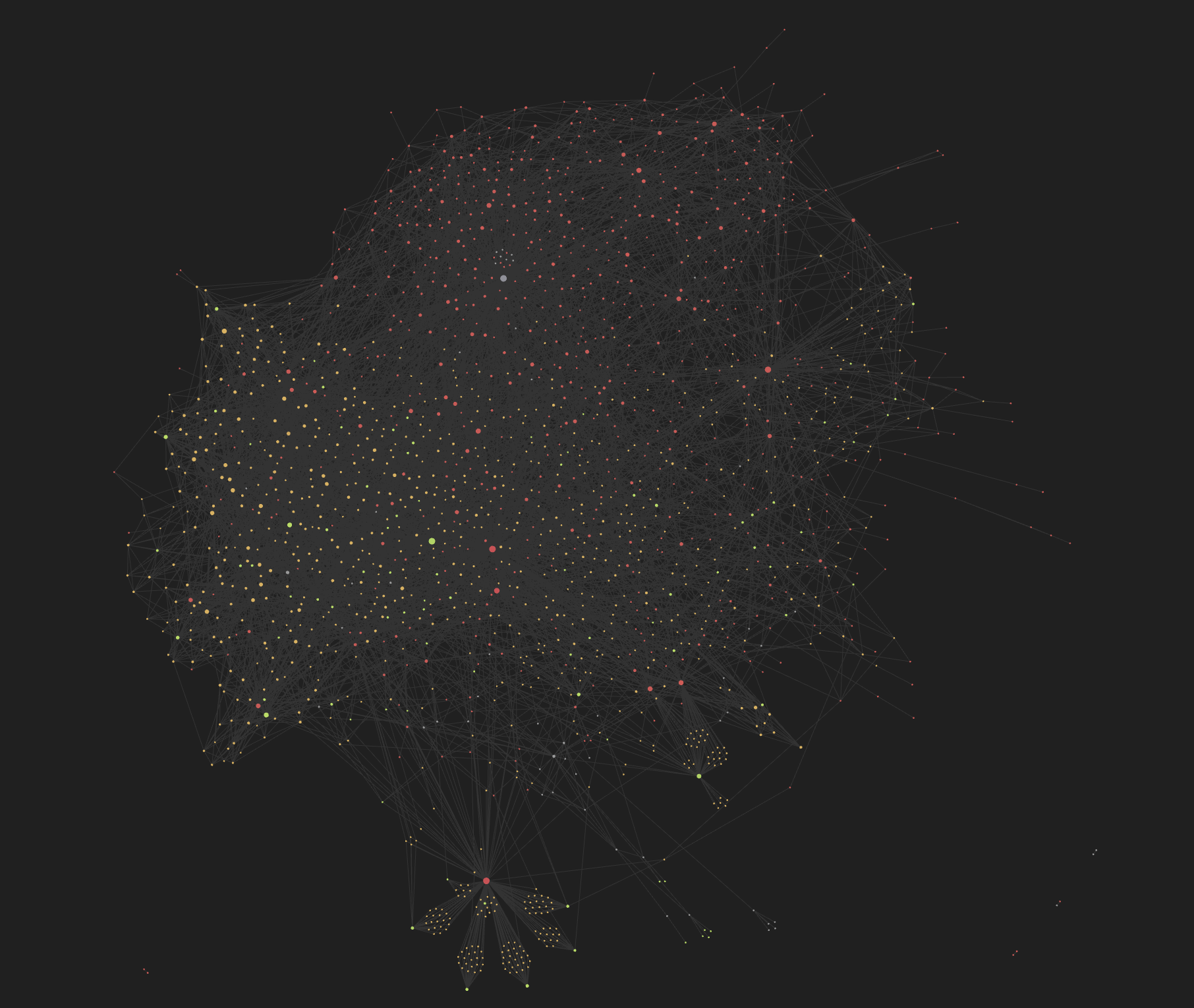 It's not perfect — I'll be doing a lot of fine-tuning as I work my way through all the content — but there should be enough in place that you can find some value. I'd love to hear your feedback, and if you're interested in contributing, please reach out! I'll also soon be adding support for the AF and the EAF .

More generally, I'd love to hear your suggestions for new aspiring rationalists. For example, there was a round of users proposing alternative reading orders about a decade ago (by Academian, jimrandomh, and XiXiDu) and may be worth revisiting in 2022.

Most personality tests are bullshit. Even the Big-5 are a bit overhyped. Take it from the experts:

"Personality scales tend to show longterm retest correlations from .30 to .80 over intervals of up to 30 years." [1]

".30 to .80" sounds good until you remember that even the upper limit means the first test score explains only about 64% of the variance in later test scores. At the median retest correlation of .57, almost 70% of your personality is explained by something other than your continuity of existence. Granted, these numbers are great by the standards of psychology, but they're rather dismal for any substantive field.

As for the rest: Myers-Briggs, Enneagram, and RIASEC... it's total nonsense. It's still fun — maybe even useful as a vague suggestion of behavioral flavor frozen in time — but ultimately such hogwash that it raises the question, "why take the time to publish this?"

I fell off the wagon.

This was supposed to be the year of the quantified self. I set out to track every minute of my time across several dozen goals in thirteen categories.

The effort began strong. For three months I was off of social media, exercising super consistently, timing mostly everything, and on track towards my goals.

Between April and July — the tracking vanished. I returned to my vices, and if anything, I became more distractible than I've been in ages. Not a second of tracking, and all hopes of achieving my goals in the trash.

My leading theory is that it was moving-related. In February, I moved to Brasília for two months. In April, I moved back to the US, and by June, I was back in the Netherlands.

Brasília was in many ways a delight: great weather, amazing fruit, a sauna and gym two minutes from my door, and everything extremely affordable. Other things were less than great: the internet speeds (at least at first), my workstation (I appropriated a low-res TV for a monitor on a minuscule kitchen table), no AC.

These things seem minor, but they add up over time. If it takes 60 seconds to install a new package, you open up Hacker News and end up wasting five minutes. Each five session chips at your attentional capacity. The frustration builds and burns you out. DX matters.

Still, mostly I was on track.

What probably caused the discipline to falter was the disruption of coming back. Moves are great opportunities to change behaviors, but this works in either direction, and the asymmetry of habit formation means you have to be extra careful.

When you're moving a bunch in a short period of time, you have to be even more careful because Ego depletion1 comes into play. You exhaust your willpower and become more susceptible to developing bad habits with each successive move.

Seasoned digital nomads probably have their tricks to get around this, but that's not me yet. Lesson learned.

A few other problems at play:

Whatever the reason, it's in the past, and every day is a chance to start fresh.

We've still got basically half a year left. What can we recover?